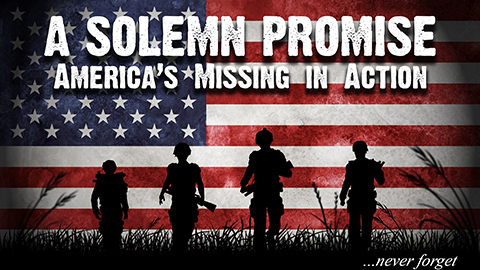 "We will leave no one behind!"

Those words...that promise...kept running through my mind as I lifted my helicopter off the tarmac for my first combat mission in Vietnam. What I didn't realize at the time was that this solemn promise - from my country to me-was a promise to be kept for all time.
I was lucky. I came home safely.

But America has over 82,000 servicemen who haven't yet come home from missions and battlefields. This enormous number includes MIAs from all our wars back to World War II.

They are still listed as "Missing in Action."

Proudly, our nation never stops searching for its lost warriors.

The fabric of this quilt, this film, is American stories told by Americans.

Ours is the only country that believes our missing should always be recovered and repatriated with their families and buried on American soil. This powerful and emotionally stirring story will be told in the documentary film; "A Solemn Promise, America's Missing in Action"

The film will witness the incredible lengths our country goes in order to find and identify our warrior's remains. These amazing, often highly hazardous searches are performed in our old war zones and fields of combat by an organization known as DPAA: "Joint Prisoner of War - Missing in Action Accounting Command". Recovered remains are taken to DPAA's laboratories to establish positive identification through DNA and dental records. After careful, meticulous identification any living relatives are respectfully notified.

The dangerous searches and the laboratory work add up to real life "Indiana Jones" meets "CSI".

One family's personal stories will "Bookend" the film. We will open with a specific soldier's loss in combat. As the Solemn Promise story moves forward we will cut to the DPAA search years later for that soldier, his discovery, identification followed by the notification of his family. Our film's end, as in the trailer, will be the Military Honor Guard Burial. With that family's permission, we will film their actual ceremony at Arlington.

Even if there are no surviving family members the warrior's remains are given a full Military Honor Guard burial. We will witness the intricate rituals, rich pageantry and honor of these ceremonies.

Millions of our MIA's extended family members are haunted. They wonder still how were their loved ones were lost? Could they still be alive? Did they die alone? What happened to them? Will they ever have closure? And, what about that Solemn Promise?

This documentary film is a story of hope for those families and all Americans.
This is the story of how America keeps its promises.